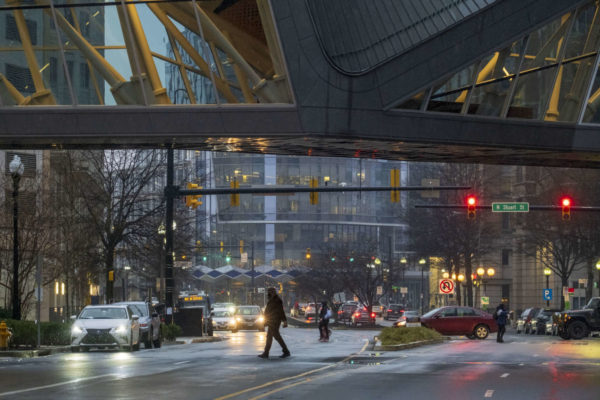 Planning Process for Pentagon City Underway — “Amazon.com Inc.’s vision for Pentagon City is decidedly futuristic, anchored by a helix-shaped building that looks straight out of a sci-fi novel. Arlington County’s existing plans that guide the neighborhood’s growth, meanwhile, date back to the days of disco… The open question is how much more development the tech giant will inspire.” [Washington Business Journal]

SUV Overturns on GW Parkway — From WTOP yesterday morning: “NB George Washington Pkwy before the Key Bridge, crash involves one on its side with the left lane only squeezing by.” [Twitter]

GMU to Partner with Local American Legion Post — “Realizing a need existed to help veterans and their families in similar situations, leaders at the law school established the Mason Veterans and Servicemembers Legal Clinic (M-VETS) in 2004…. A new partnership with American Legion Post 139, which will be standing up a new building in Arlington, will allow the clinic to further increase its impact.” [George Mason University]

New Apartment Building Opening — “AHC Inc., a leading developer of affordable housing in the Washington-Baltimore metro region, is pleased to introduce a new apartment community in Arlington, VA, called The Apex. Featuring a total of 256 apartments, the $100 million development has started to welcome its first residents and is currently accepting applications.” [Press Release]

Instant-Runoff Voting Challenges — “Technical, legal and financial complexities likely will mean any start to ‘instant-runoff’ County Board voting in Arlington will be pushed back to 2022 at the soonest. ‘It’s not practical for this year. The earliest this could possibly be used is next year,’ said Arlington Electoral Board secretary Scott McGeary, summing things up during a Feb. 6 Electoral Board meeting.” [InsideNova]