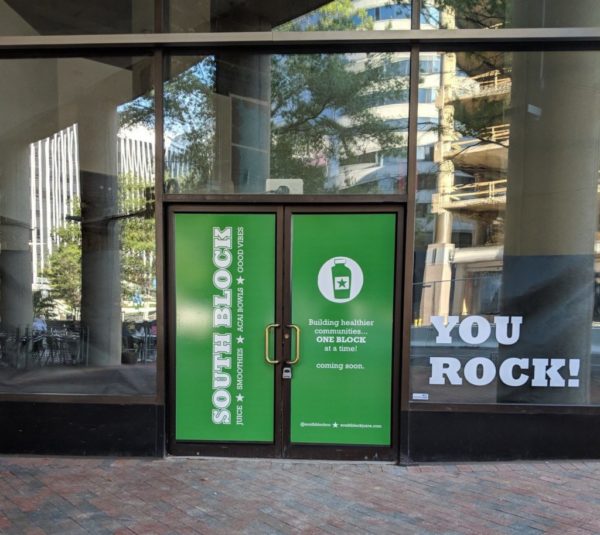 South Block is hoping to open its new Rosslyn location by late August.

Owner Amir Mostafavi told ARLnow yesterday (Monday) that he’s “excited” about the summer opening, and is planning a block party to celebrate.

“We anticipate opening in late August followed by a community block party in September,” said Mostafavi. “The block party will consist of a live DJ, Bash will be there, we will be handing out swag bags to the 100 blockstars in line, free samples and more.”

The new eatery (1550 Wilson Blvd) will take up part of the space that previously housed Cafe Asia, next to Bash Boxing.

Mostafavi previously told ARLnow that he picked the location for its proximity to Bash.

“We’ve always had a really strong relationship with Arlington’s fitness community, so this is just a really good fit,” he said.

A new shop serving up smoothies, coffee and “superfood” recently opened in the lobby of an office building in Clarendon.

The Waterhouse Coffee and Juice Bar debuted last Tuesday (Oct. 30) with a soft opening for the office building tenants to sample the food and drink, Connie Kim, the owner and manager, told ARLnow.

Located at 3033 Wilson Blvd, customers use the street entrances on Wilson Blvd and N. Garfield Street or the sliding doors in the lobby of the office building to reach Waterhouse.

The tenants have come back since the soft opening, Kim said. While Kim said she is familiar with tenant customers from her first and, now-closed, business in the building shared by CNN and the U.S. Department of Education, these customers surprised her.

“I never knew tenants could be this intimate and regular,” she said.

The menu spans hot and cold coffee and teas to smoothies and freshly squeezed juice for drinks. The “natural fruit smoothies” are made from ice and fruit juice, while the “power boost smoothies” pack in about seven different ingredients, Kim said. Food options include toasts, salads, sandwiches, acai bowls and all-day breakfast.

The name “Waterhouse” popped into her head while sitting in an airport about four years ago, Kim said. Initially, she wanted to open a taco place, but then decided a coffee shop would be a better fit for the space by the Clarendon Metro station. Previous establishments at the space include a cafe and deli known for its vegan sandwiches and an Italian hoagie and Mediterranean food shop.

Waterhouse seats about 15 people inside the shop, with an additional 15 seats in the lobby. Kim plans to have four tables outside in the spring.

South Block will soon bring its array of juices, smoothies and acai bowls to Rosslyn.

The Arlington-based chain is planning its fourth location in the county for the former Cafe Asia space (1550 Wilson Blvd), next to the forthcoming Bash Boxing workout studio, according to founder and CEO Amir Mostafavi.

“Our Clarendon spot has turned into such a busy location, and we’re growing as a company, it just seemed like it was needed for us in that area,” he told ARLnow. “Regulars can attest that if you come in on a Saturday in Clarendon, it’s just packed. So now we can spread out a bit and help the serve community better.”

Mostafavi expects that the Rosslyn location will open in the late spring of 2019, just a few months after South Block opens its third Arlington store in the new Ballston Quarter development. He says both new locations will offer the same line-up as the rest of its shops, including the toast options he’s recently added to his menus.

In an unusual twist of fate, both the new locations will be located next to Bash Boxing’s gyms, with the fitness studio also planning a Ballston Quarter location.

Though Scott Parker, one of the studio’s co-founders, says the pairings were largely a “coincidence,” Mostafavi expects the businesses will easily compliment each other.

Mostafavi says his real estate broker first showed him the Cafe Asia space a few months back as he eyed an expansion. When he subsequently heard from Bash’s backers that they too were eyeing the space, he figured opening up a juice bar right next to fitness studio would make a good bit of sense.

“We’ve always had a really strong relationship with Arlington’s fitness community, so this is just a really good fit,” Mostafavi said.

By the time South Block opens its two new Arlington locations, Mostafavi says he’ll have 10 shops running across the region.

A new restaurant offering coffee, smoothies and “superfood” is gearing up to open in Clarendon.

Signs promising that Waterhouse Coffee and Juice Bar is “coming soon” recently appeared on an office building at 3033 Wilson Blvd, near the road’s intersection with N. Garfield Street.

Though the restaurant doesn’t have any online presence to speak of just yet, the signs say the eatery will offer Lavazza coffee and espresso, “freshly pressed juices” and smoothies. The store is also set to serve “powerful superfood” including acai bowls and avocado mash.

The signs do not, however, offer any clarity on when the restaurant might open its doors.

Waterhouse is located around the corner from Casal’s Spa and Salon and Hunan Number One.

The store, at 3260 Wilson Blvd, held its grand opening on Sunday. It offers 100 percent cold-pressed, all-natural juice that’s produced locally, at a price of $9-10 per bottle.

JRINK is competing with nearby South Block Juice Co. in the high-end juice space, which has found a market thanks in part to the popularity of so-called juice cleanses. JRINK — like South Block — also offers coffee, smoothies and superfood bowls.

This is the second Virginia store for JRINK, which has four existing locations in the District and a fifth in Falls Church, where its juices are made. The company says the new Clarendon store is the first of its kind in the region with a drive-thru window.

“JRINK’s newest location allows customers to enjoy a drive-thru experience that keeps your health in check, as well as a full storefront offering their signature juices, warm beverages, and superfoods,” notes a press release.

“Each JRINK flavor (ranging from $9-$10 each or $155 for a full, three-day reboot) contains up to five pounds of fresh fruits and vegetables… completely free of added sugar, preservatives and chemicals,” the press release adds. 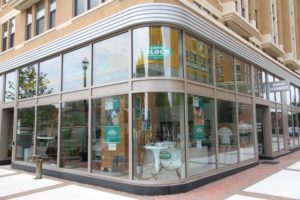 While microbreweries are popping up all over the D.C. area, East Falls Church could soon be home to a “micro-juicery,” from the owner of South Block Cafe.

Amir Mostafavi says South Block Juice Company will open at 2121 N. Westmoreland Street in the next few months. The facility will produce the juice served at South Block and will be available for pickup around the area and for home delivery.

Mostafavi said he wants customers to be able to look into the location and see how the juice is made, and perhaps take tours like visitors do at microbreweries. The juice will also be sold fresh next door at Urban Pantry, which opened last week.

“It’s going to be our new production facility,” Mostafavi said. “We needed a larger space for our kitchen. The space we’re making the juice at right now, we’ve just outgrown it. We’re getting a larger juicer that’s going to greatly increase our volume and capacity. It’s something we’ve been looking into for a little while now as we’ve grown in the juice part of the business.”

South Block has been getting its juice from Mostafavi’s kitchen at Campus Fresh on George Washington University’s campus. Mostafavi opened that store 10 years ago and South Block Cafe opened three years ago, but when he bought a cold press a year ago to sell juice in bottles, the business exploded.

“Once I bought the cold press, that’s when the business took off,” he said. “We’ve already been getting a lot of customers throughout the area coming to our shop for the juice for juice cleanses.”

South Block Juice Company will get a revamped website around when the micro-juicery opens, Mostafavi said, which will make it easier for customers to order juices for delivery. That includes the three-day juice cleanse, which includes 18 bottles of juice, to be drank in specific order, for $150.

Mostafavi also said South Block is looking into “satellite locations” in the next year or so, and he hopes to soon begin national distribution.