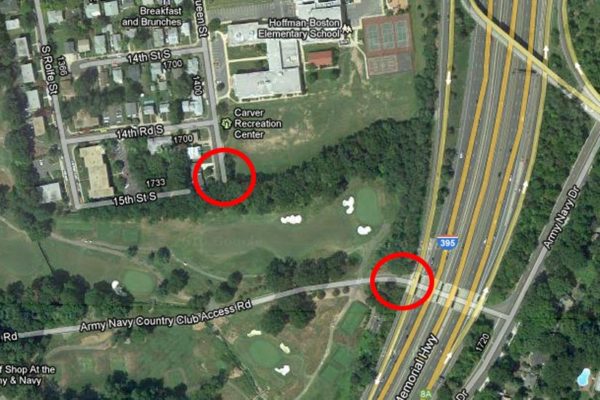 Construction work on an access road crossing a portion of Army Navy Country Club could be pushed back by nearly a decade, as Arlington grapples with a funding squeeze impacting transportation projects.

County Manager Mark Schwartz’s proposed Capital Improvement Plan calls for engineering work on the project, which is designed to link the Arlington View neighborhood to Army Navy Drive, to start by fiscal year 2027 with construction kicking off two years later. The county has long expected to start design work for the project by fiscal year 2020, with work to begin in 2022.

Since 2010, county officials have aimed to build the new road, which would be reserved for emergency vehicles looking to more easily cross I-395, as well as bicyclists and pedestrians. The 30-foot-wide road would run from S. Queen Street, near Hoffman-Boston Elementary, to the I-395 underpass, where a country club access road meets up with Army Navy Drive.

The process has required a good bit of back-and-forth with the country club — the county only secured an easement on the club’s property as part of a deal to allow Army Navy’s owners to build a larger clubhouse than county zoning rules would ordinarily permit. Some members of the country club even sued the county to block the arrangement, over concerns that cyclists and pedestrians on the proposed trail would be disruptive to golfers.

Yet Arlington leaders have pressed ahead with the project all the same, with the County Board approving two different updates to the county’s Capital Improvement Plan, known as the CIP, including funding for the project.

Schwartz hasn’t gone so far as to ask the Board to abandon the project — his proposed CIP calls for the county to spend $837,000 on engineering work in fiscal years 2027 and 2028 — but the delay does reflect Arlington’s new challenges paying for transportation projects.

As he’s unveiled the new CIP, Schwartz has frequently warned that the deal hammered out by state lawmakers to send the Metro system hundreds of millions of dollars in annual funding has hammered localities like Arlington. Not only does the deal increase the county’s annual contribution to Metro, but it sucks away money from the Northern Virginia Transportation Authority, a regional body that would ordinarily help localities fund transportation projects.

With the county having to shift money around to compensate for those changes, officials say smaller projects like the Army Navy access road will necessarily suffer.

“Overall, the transportation CIP has fewer resources for smaller, neighborhood-scale improvements due to reduced funding resulting from legislation,” Jessica Baxter, a spokeswoman for the county’s Department of Environmental Services, told ARLnow via email.

The project’s delay comes as particularly bad news for people living in the Arlington View neighborhood. One resident, Eric Davis, told ARLnow via email that he fears delaying the project would “endanger the lives of nearby bicyclists and pedestrians.”

“With Columbia Pike being our only access out of the neighborhood, this new access road would give us a safe alternative to reaching Pentagon City, Crystal City, and other points east,” Davis wrote. “And, if/when connected to the Washington Boulevard path currently under construction, it then becomes an essential north/south connection in Arlington for bikes and pedestrians.”

Davis also pointed out that the project as a whole could be in jeopardy if delayed much longer.

The county’s CIP documents note that the easement for the country club’s land was recorded back in March 2012, and “may terminate automatically if construction contracts are not awarded within 20 years of that date.” Baxter noted that “the current schedule anticipates completion before the easement expires,” however.

Any delay is also contingent on the County Board approving the change in the CIP. The Board is in the midst of holding a series of work sessions on the CIP this month, but doesn’t expect to sign off on a final spending plan until July 14.