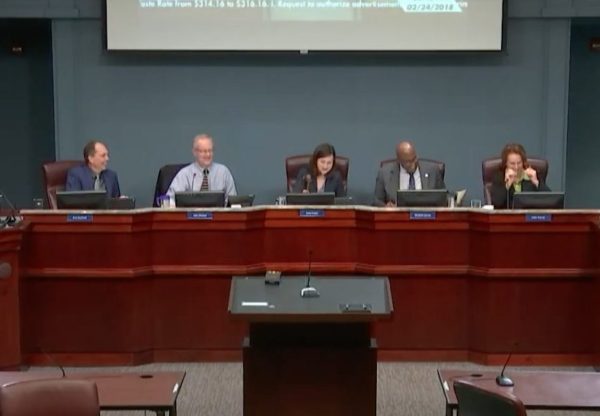 Though it comes with some painful cuts and delays a variety of anticipated projects, a 10-year, $3.4 billion construction spending plan won the County Board’s approval this weekend.

The Board unanimously signed off on a new Capital Improvement Plan, commonly known as the CIP, at its meeting Saturday (July 14), marking an end to its months-long work to wrestle with the county’s budget pressures and lay out a new blueprint for major construction projects through 2028.

Ultimately, Board members made relatively few changes to County Manager Mark Schwartz’s proposed CIP, but did manage to find an extra $1 million for the Neighborhood Conservation program.

That means the program, designed to fund local infrastructure projects like sidewalk improvements or new landscaping, will have $37 million to work with over the next decade instead of $36 million, even though community leaders still fear the $23 million funding cut will imperil Neighborhood Conservation’s future. The Board also formalized plans to study potential reforms to the program, in order to ensure its long-term survival.

By and large, however, the Board didn’t have much leeway to pump much additional money into the CIP, considering that the county remains constrained by challenging factors like a decrease in commercial tax revenues and an increase in the amount of cash it needs to send to Metro as part of a deal to provide the service with dedicated annual funding.

“It’s kind of a carrots and peas CIP, rather than a steak and asparagus CIP,” said Board member John Vihstadt. “It’s a realistic one for where we are at this point in time, given our economic circumstances and near-term challenges ahead.”

Board generally members struck an optimistic tone about the CIP Saturday, but there is little doubt that they’re already looking ahead anxiously to 2020, when the Board will revise the spending plan once more. By then, the county’s revenue picture could improve, or lawmakers in Richmond could answer Arlington’s pleas and tinker with the Metro funding deal to free up more money for Northern Virginia transportation projects.

That’s why Board Vice Chair Christian Dorsey stressed that he looks at the CIP as “a two-year document and an eight-year math exercise.” He was particularly adamant that parents concerned about school funding shouldn’t view this spending plan with trepidation, even as debate simmers over how the school system builds new space for high schoolers at the Arlington Career Center.

The Board’s CIP includes $614 million to fund the school system’s own construction plan, and the county wasn’t able to find much in the way of additional money to fund some of the more ambitious construction plans the School Board considered. Yet Dorsey is broadly optimistic that this new, limited CIP is far from the end of Career Center discussions.

“When our needs become more clear in the coming years, whether it’s schools or county facilities as well, and we’re able to price them out more, we’ll figure out how to pay for it,” Dorsey said.

There are certainly plenty of other cuts in the CIP the Board hopes to someday revisit. For instance, the plan pushes out the construction of second entrances at the Ballston, Crystal City and East Falls Church Metro stations far into the future, and cuts funding for improvements on some of the county’s arterial roads.

The CIP also contains only limited funding for planning at the Buck and Carlin Springs Road properties, a pair of sites officials have long eyed as potential homes for new schools or county facilities someday.

However, the plan does maintain funding for previously approved capital projects like a new Lubber Run Community Center and a replacement for Fire Station 8 on Lee Highway.

Board members were also eager to reiterate their support for the Long Bridge Park aquatics center. The project isn’t funded as part of this CIP, yet the county’s strained financial picture has nonetheless convinced some in the community to agitate for the pool’s delay or cancellation, in favor of sending its funding elsewhere.

“To try to cancel the contract now is not reevaluating past decisions in light of new information,” said Board Chair Katie Cristol. “To cancel a contract that breaks ground in a week would be setting a toxic precedent.”

Vihstadt, the lone Board member to vote against a slimmed-down version of the project last fall, reiterated his belief Saturday that the project should be delayed. Yet he also signalled that he was willing to let the matter go, for now.

“We had a vote last December, I was in the minority, I acknowledge it and I accept it,” Vihstadt said. “But I have no doubt if this process were going forward today, or if there were a vote on this particular issue today by the voters of Arlington, it would fail.”