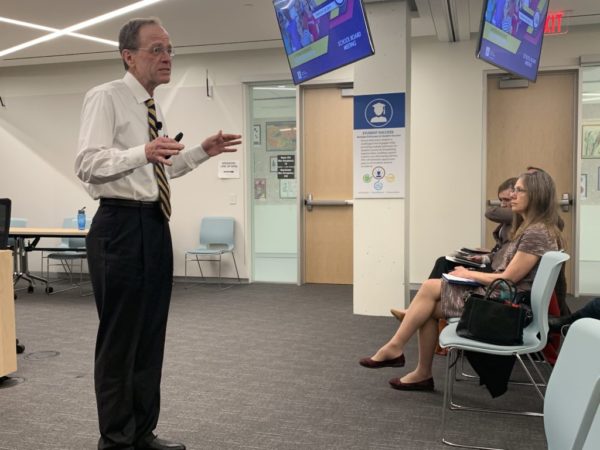 (Updated at 10 a.m.) Arlington schools will likely face class size increases and could see some staff layoffs next year under terms laid out in Superintendent Patrick Murphy’s proposed budget for the new fiscal year.

Murphy delivered his first draft of a new spending plan for fiscal year 2020 to the School Board last night (Thursday), arguing that even the tax increases proposed by the County Board won’t be enough to help the school system avoid some spending cuts. The school system is preparing to open three new schools next year to cope with persistently rising enrollment levels, which Murphy expects will create another challenging budget year for county schools.

Much like the county government’s own financial picture, sketched out in earnest by County Manager Mark Schwartz late last week, Arlington Public Schools’ budget picture is still a bit more promising than it appeared this fall. School officials initially warned that they could be facing a $43 million budget gap next year, a deficit that Murphy says could’ve been the largest one for APS in the last 30 years, if not the school system’s history.

However, rising real estate assessments filled county coffers a bit more than officials anticipated, easing some concerns. And Murphy was glad to see, too, that Schwartz proposed 1.5-cent real estate tax increase largely designed to meet school needs, and the superintendent built his budget using that increase as a base.

But even if the County Board approves that tax hike, Murphy says the school system will face cuts. He built a series of spending trims into his plans, most notably the reduction of 23 staff positions, bumping up class sizes slightly.

“It’s a tough year, there’s a lot of things happening,” Murphy told a group of reporters and school leaders in a budget briefing Thursday. “But given where we are and the things that are happening, I thought that was prudent.”

The School Board narrowly avoided that outcome last year, thanks largely to some one-time funding from the county. But Murphy says he fully expects the county’s own money troubles, driven by a still-high office vacancy rate and rising Metro expenses, means that the school system might not be so lucky this time around.

The proposed cuts total about $10.1 million in all. That will include moving $5.28 million in one-time money to cover construction and maintenance funding, rather than using ongoing funds.

Murphy says he may need to make another $8.9 million in cuts to balance the budget, if the County Board doesn’t approve a tax increase over and above Schwartz’s proposal. He did not say, however, just how of large of a tax hike would meet the school system’s needs.

The Board signed off on advertising a 2.75-cent increase last weekend, setting the ceiling for any potential tax rate it may adopt throughout the budget process. Officials can always lower the rate beyond the one advertised, but can’t raise it.

Board members agreed to that higher rate largely over concerns that schools would need more cash, and Murphy says those concerns were well founded. Without more cash from the county, Murphy expects that cuts to APS central office staff would be necessary, in addition to some transportation and benefit changes, the introduction of new and increased fees and delays to student support programs.

“I hope we don’t have to go there,” Murphy said.

And should the Board decline to raise taxes at all, rejecting Schwartz’s proposed increase, Murphy says he’ll need to make an additional $11.1 in cuts, prompting even more layoffs. However, he said he’s “optimistic” that the Board will avoid that outcome.

Depending on the county’s budget, Murphy also warned that the school system could tinker with its plans for bumping up employee pay rates this year.

Currently, Murphy hopes to order a fifth straight “step increase,” moving eligible employees up the school system’s pay scale commensurate with experience. But he also wants to follow through on long-held plans to raise pay for instructional assistants, bus drivers and bus attendants, arguing that the changes are necessary to keep APS “competitive in the region.”

“It’s a competitive environment out there,” Murphy said.

Those changes will cost APS $12.9 million in all, though Murphy cautioned that “whether we build in that direction this year, or build there in the future” will be dependent on how much money the county sends the school system.

One budget line that will remain unchanged, Murphy says, is the $10.1 million the school system will spend to afford both one-time and ongoing costs associated with opening three new schools next year and repurposing two others.

Alice West Fleet Elementary, Dororthy Hamm Middle and The Heights Building (housing the H-B Woodlawn and Stratford programs) will all open next year. APS will also move the Montessori program currently at Drew Model School into its own building (formerly Patrick Henry Elementary) and convert Drew into a full neighborhood school.

APS will also need to keep up with an expected enrollment bump of about 1,059 students next year, roughly the same level of enrollment growth the school system has seen over the last decade. That will require about $8.73 million in spending to manage, and the addition of 83 employees.

The County and School Boards will now spend the next several weeks debating their competing budgets.