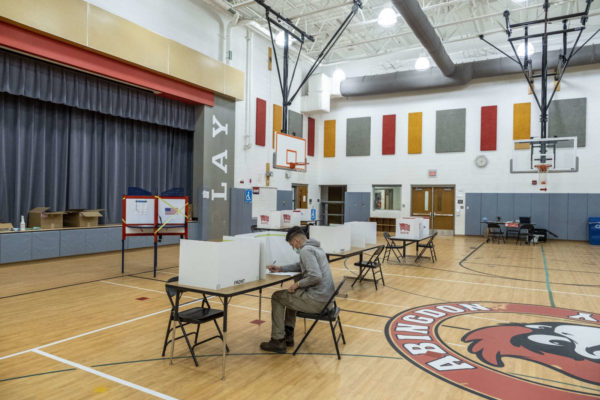 (Updated at 4:15 p.m.) Arlington County Democrats enjoyed a clean sweep in their bids for County Board and School Board, with clear results in early on Tuesday night.

County Board Chair Libby Garvey (D) was awarded four more years in office, garnering 72% of votes. Cristina Diaz-Torres and David Priddy — endorsed by the local Democratic party in the nonpartisan School Board race — earned 43% and 36%, respectively.

NAACP Education Committee Co-Chair Symone Walker and frequent local candidate Audrey Clement had unsuccessful independent bids for the School Board and County Board, respectively. Clement garnered 29,923 27% of votes, while Walker received 19% in the three-way School Board race for two open seats.

More than 75% of active voters had cast ballots by 4:30 p.m. Tuesday, including a record-setting 63% who voted early and by mail by Sunday. Since mail-in ballots have until Friday to arrive, the county elections office will not have a final turnout number until then, Arlington Director of Election Gretchen Reinemeyer said in an email.

Local Democrats said they are pleased with the local turnout, hailing a “decisive” vote for the entire Democratic ticket, even as they anxiously watched developments in the still-undecided presidential race.

Garvey said today that she will continue focusing on equity, innovation and resilience during the pandemic during her next term.

“People are tired of the virus,” she said. “This is a difficult time and I hope we can remember to treat each other kindly. We’re all under stress and doing our best. It’s important to take a deep breath and continue to stay together as a community as we work through a lot of difficult issues.”

“Arlingtonians are smart and informed,” Garvey added. “It’s an honor and a privilege to serve Arlington for four more years.”

Turning to the question of reopening Arlington Public Schools classrooms for in-person instruction — which is now delayed until next year for most students — Diaz-Torres and Priddy said today that any plan must focus on safety metrics.

“We need to be careful and make sure we’re proceeding with caution, making sure we’re following the science, not the emotions of the day,” Diaz-Torres said.

With cases rising, APS needs to focus on keeping the kids with severe needs — who returned to schools today — safe, while making virtual learning as high quality as possible for others, she said.

As a School Board member, Priddy said he will be talking with other public school systems and even private schools to see what APS can learn from them.

In an email Wednesday morning, Arlington Democrats Chair Jill Caiazzo thanked the candidates who ran for office in Arlington and congratulated the winners on their “resounding and well-deserved victories.”

“We know that they will work hard on behalf of all Arlingtonians and lead our county and country through these challenging times,” she wrote.

On social media this morning, County Board member Katie Cristol thanked election volunteers for their hard work, and Arlington voters for overwhelmingly approving the five local bonds on the ballot. Cristol also welcomed Priddy and Diaz-Torres to the School Board and thanked Walker for her advocacy

I’m also grateful that my own kid, and so many others in Arlington, will attend a school system made better and more equitable by the advocacy and community leadership of @SymoneforAPS and congratulate her on her campaign.

Walker, who dropped out of the Democratic endorsement caucus after her federal employment raised Hatch Act questions, said her defeat was unsurprising but she does not count it as a failure.

“I think I accomplished change by changing the narrative of the School Board race to focus on curriculum and instruction, particularly equity through literacy,” she said.

Walker was less conciliatory in tone last night, writing in a Facebook post that her defeat was attributable to the power of the Democratic endorsement.

It’s unfortunate that a majority of “low information” voters who are oblivious to the serious plight being faced by our schools are electing the school board by blindly voting straight down the ACDC sample ballot, which, ironically, was silent about the education of our students in listing why this is the most important election of our lifetime. Nevertheless, I pray that Cristina and David will rise to the challenge of turning this ship around to put our students first amidst having to live with COVID-19 for the foreseeable future

Nonetheless, Walker told ARLnow this morning that she and her small team — nearly all APS moms — ran a grassroots, issues-focused campaign to be proud of.

“I ran for the School Board because I thought I had the opportunity to push for change on the inside,” she said. “Since that did not work, I’m going to continue pushing APS from outside.”

“It’s virtually impossible for insurgents to make a showing,” Clement said. “That is precisely why I’m running — because I’m saying there’s something wrong with that.”

Clement won six of the county’s 54 electoral precincts, the Sun Gazette noted, but Garvey improved her margin of victory from four years ago.

Whether she will run again depends on her health and finances, she said, and for now the possibility of another bid is uncertain.

“I enjoyed this campaign,” she said. “I think they’re something wrong with the system of one-party rule. We need to have more people with diverse views helping to run the system.”

All the candidates had praise for election staff and the elections office, which they said made voting easy and safe.

Clement said the polls were sanitary and efficient. Priddy said he “had a lot of faith in the process” after seeing the ballot machines tested before they were sent to polling places.

Diaz-Torres credited elections staff with instilling a sense of finality and security in the local results.

“It was a breath of fresh air in what has been otherwise a demoralizing election,” she said.