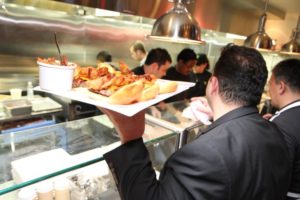 Arlington County has seen a surge in new restaurants in 2015.

So far this year, 56 new restaurants have either opened or are expected to open by the end of the year. That includes all types of restaurants, from Oz to Pepita Cantina to Kona Grill to Cinnabon.

The 56 openings this year is compared to a relative lull in new restaurants in 2014, with only 30 restaurant openings.

(The statistics, which come from ARLnow.com’s reporting on new restaurants, are approximate and may exclude certain small restaurant openings and changes in business.)

While fewer in number, the vast majority of the restaurants that opened in 2014 are still in business, a notable achievement in the competitive and volatile restaurant business. There are, of course, some exceptions. 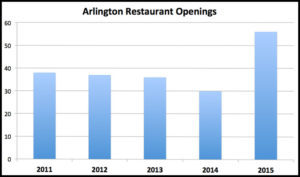 Pizza Vinoteca in Ballston was one of 2014’s most hyped openings and quickest closings. Another one that bit the dust this year was 100 Montaditos, which folded after 13 months in Rosslyn. Other notable restaurant closings, just since May 1, include Bungalow Sports Grill, Jay’s Saloon, Tutti Frutti Frozen Yogurt, Johnny Rockets, Ri Ra Irish Pub, Ted’s Montana Grill, Corner Bakery, Charlie Chiang’s, Boston Market and Willow.

The past two years of volatility in restaurant openings followed three years, from 2011-2013, when restaurant openings held relatively steady, with a slight year-over-year decline — 38 in 2011, 37 in 2012 and 36 in 2013. That period brought local restaurants with staying power, like Green Pig Bistro and Copperwood Tavern, and those that fizzled out, from Fat Shorty’s to Red Parrot Bistro to Wiinky’s.

What should Arlington food fans expect in 2016? Anecdotally, there haven’t been many new restaurant announcements as of late, but there are at least three 2016 openings worth watching, and they’re all in the same place: Matchbox, Sugar Factory and Shake Shack are coming to the expanding Fashion Centre at Pentagon City mall next year.

END_OF_DOCUMENT_TOKEN_TO_BE_REPLACED

More Stories
Chefs Beat Out Firefighters in Charity Cooking CompetitonReid Goldstein: Why You Should Vote For Me